December 20, 2011
Regular readers (all six of you ;-)) will have noticed that I haven’t posted about SharePoint for a while. For the last couple of months I’ve been working with the Developer Guidance team at Microsoft to write some MSDN content on enterprise-scale web deployment and application lifecycle management. I’ll let you know when the content is available, and I don’t plan to duplicate it here. What I want to do is just to draw attention to a couple of areas that I found particularly tricky to figure out.

The first area involves the IIS Web Deployment Tool (commonly known as “Web Deploy”), and a gotcha around deploying web packages as a non-administrator user. For brevity I’ll have to assume that you’re broadly familiar with:

One of the big advantages of Web Deploy 2.0, on IIS 7 or later, is that non-administrator users can deploy web packages to specific IIS web sites. This is generally useful in two scenarios:

By default, the Web Deploy Handler exposes an HTTPS endpoint at the following address:

However, when a non-administrator user deploys a web package to the Web Deploy Handler, they need to add the IIS website name to the endpoint address as a query string:

Why the difference? In a word, authorization. Your non-administrator user doesn’t have server-level access to IIS, they only have access to specific IIS websites. If they attempt to connect to the server-level endpoint, Web Deploy will an ERROR_USER_UNAUTHORIZED error. The event log on the destination server will show an IISWMSVC_AUTHORIZATION_SERVER_NOT_ALLOWED error like this: 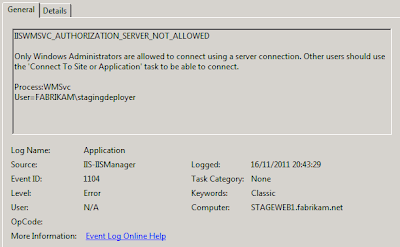 So you’ve got to use the site query string. Now for the gotcha.

Due to an open bug in the current version of Web Deploy (2.1), you can’t specify a query string in the endpoint address if you use the .deploy.cmd file generated by Visual Studio to deploy your web package. In other words, this won’t work:

I’ve seen some fairly bizarre “workarounds” for this—for example, drop the query string and use an administrator account—this works, but it kind of defeats the object when the whole point of the exercise was to use a non-administrator user to deploy the web package. What you need to do is to use Web Deploy (MSDeploy.exe) directly rather than running the .deploy.cmd file.

All the .deploy.cmd file contains is a bunch of parameterized Web Deploy commands. This is put together by the build process to take some of the work out of the deployment. For example, you don’t need to specify the location of the web package, the Web Deploy providers to use for the source and destination, the Web Deploy verb, or the location of the .SetParameters.xml file, because the .deploy.cmd file knows this already. However, there’s nothing to stop you using the raw Web Deploy commands directly. The easiest way to do this is to look at the output when you run the .deploy.cmd file – you’ll see the actual MSDeploy.exe commands written to the console window. You should see something like this (ignore the line breaks):

Run this command directly from the command line, using your non-administrator user credentials, and the deployment should succeed.

Packaging and deploying web applications is a fairly broad and complex topic, and I’ve had to gloss over many of the details in this blog post. The content we’re developing for MSDN will cover these kinds of issues in much more detail, and I’ll link to the content as soon as it’s available.

Thanks to Tom Dykstra at Microsoft for helping me troubleshoot the issue and pointing out the bug.
IIS Web Deploy